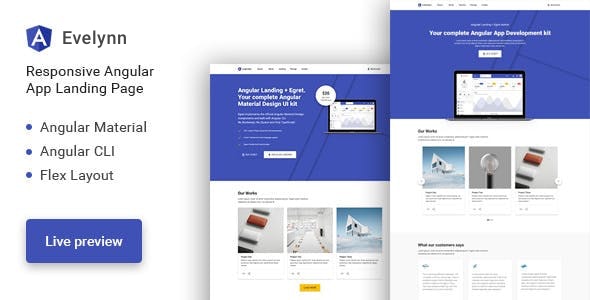 A pure Angular and Typescript landing page with minimal design and feel. Angular Landing page is built with angular material, flex layout and angular CLI. Each page section is composed of its own HTML, SCSS and ts files, organized in its own directory and So it’s easy to customize and reuse.

Get unlimited future updates on purchase. Angular Landing will be up to date with future angular versions.

Access git repository and keep an eye on update process and changes. Submit issues and get better support, request new features and most up voted request will be implemented.

Angular landing is compatible for any device. Flex layout makes everything is much easier. To define Grid size, gutter width(Gap) and breakpoints you just need to bind property to elements.

Styles are written in scss files. You can import your own or third party style files to template easily.

Angular landing is a composition of pure angular components written in pure typescript. CSS frameworks like Bootstrap and Javascript library like jQuery are not used.

One page style navigation. Reusable directive srollTo=”elementID” allow you to use that feature anywhere in the template.

Pricing tables for your pricings and plans

Carousels are made with @ngu/carousel, a pure angular carousel package.