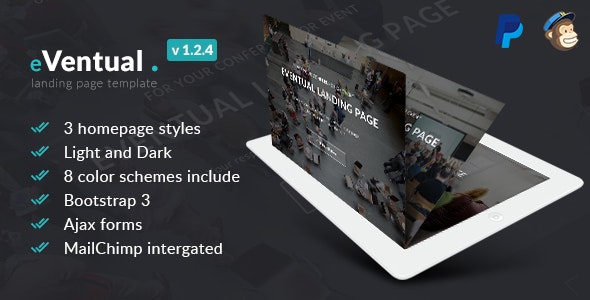 Eventual is a modern and clean Landing Page Template for conferences and events. Compatible with grid system by Twitter Bootstrap 3. It has any different homepage styles and 8 predefined color schemes. Subscribe form is already integrated with MailChimp service. Well organized code as well as detailed documentation will allow you to creatively and easily customize template and create a successful project.

You can read documentation for Eventual Landing Page online

Background images from Flickr (Not Included in main files)

Images in sliders from Flickr (Not included in main files)

Background video from http://www.videezy.com/ (Not included in main files)

All images in the downloadable package with the template are replaced with placeholders. Please use the documentation to insert your image into the template.

4.57 stars
4.57 average based on 7 ratings. (more information)
© All Rights Reserved noblige
Contact the Envato Market Help Team
Quick Links Explore popular categories
by
by
by
by
by
by