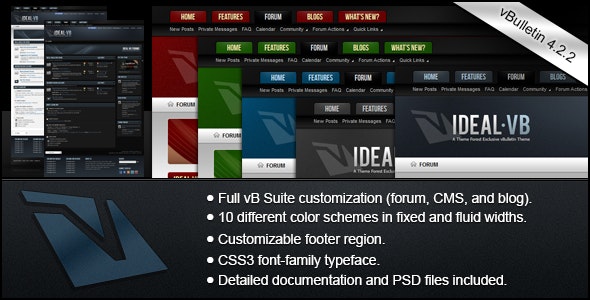 Please be sure to read the update section below when considering purchasing this theme, as well as the FAQ under the Support tab.

Ideal is a premium theme for the full vBulletin 4.x suite: the CMS and blog in addition to the forum. It was designed to serve those vBulletin users who want a more clean, modern look for their vBulletin-based site. Though Ideal features full suite customization, the theme will work with forum-only installations.

Ideal looks great out of the box, but it also makes for an excellent base theme to build upon should you wish to customize it further.

4.49 stars
4.49 average based on 86 ratings. (more information)
© All Rights Reserved ThemeTempest
Contact the Envato Market Help Team
Quick Links Explore popular categories
by
by
by
by
by
by