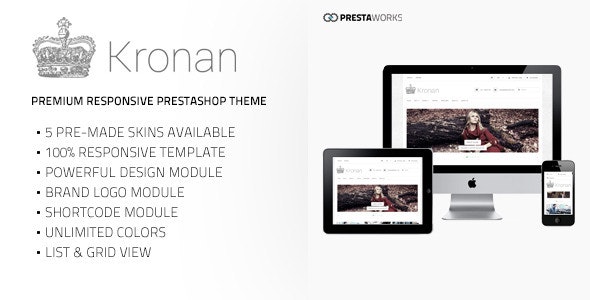 Kronan is the first theme for PrestaShop at ThemeForest with support of Shortcodes!

A short and sweet responsive theme for a multitude of shops. Fashion, electronics or even toys and memorabilia will all have a great presentation using this theme. This combined with the PW Designer module ensures you can have the shop looking just the way you want.

Everything you need and everything you don’t. Kronan is a simple yet powerful Prestashop theme with a minimalistic approach to aid the user in focusing on what’s important: A good and solid shopping experience.

Do you have questions or other informations regarding the Kronan theme? Don’t hesitate to ask your question under the Comments tab at the top of this page.
Show More Show Less