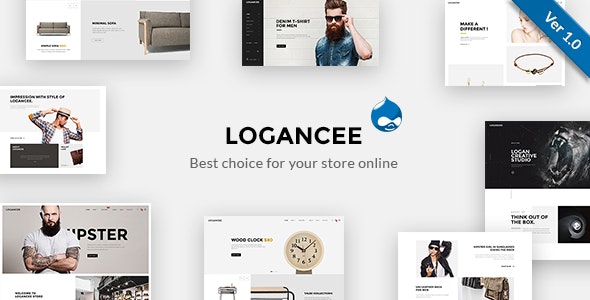 Logancee is multipurpose Drupal 7 theme with Ecommerce integration using Drupal commerce. Featuring different product types, stock management, Product reviews, product attributes, cart and all you need for your next online commerce e-shop. it also comes with full internationalisation support including multi currency for the online shop using the european central bank for currency conversion automatically. Everything is setup and ready to go.

Drupal commerce has several options for payments, and the theme comes with paypal integration by default.

This theme is a great combination of a clean, modern, minimalist design and a number of powerful features. With all of love and passion, our most talented designer tried his best to complete this ecommerce theme.

Therefore, this responsive ecommerce template will be ideal for any web developers to customize and make their own site become one of the top online shopping sites .

It has many different types of headers, multiple style & layout. Everything which is ready to use to make a complete website such as landing page, sale promotion, sales product, etc Whatever products that you are selling, it will catch your viewer’s interest from their first sights.

The theme is not compatible with Mod security, drupal itself does not recommend mod security as it conflicts with some drupal functionality. so people hosted on a shared godaddy hosting should consider changing. You can read here an official drupal statement about this : https://www.drupal.org/node/695902