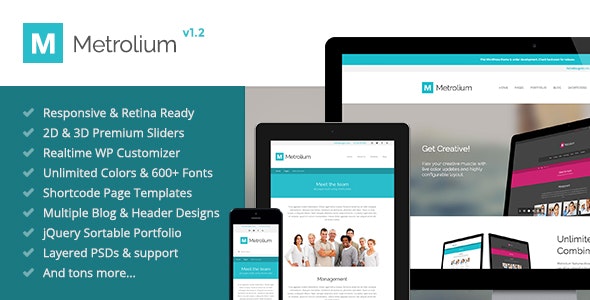 What people are saying

Even at version 1.0, this theme is already solid, full of features, customizable with instant previews, and comes with detailed documentation (including a full shortcode reference guide). Metrolium hits on all the right criteria for me: Google web font support, responsive design (on mobile devices, you get a beautiful slide-out menu which fits well with many iOS/Android apps these days), built-in support for Portfolio and Blog and a clever layout based on “Bands” that can themed to your liking. The support from David, so far, is outstanding. I can’t recommend this theme enough!
— JLishere

This is a real professional looking Theme and designed with the highest standards. The Support is best in class, I had some questions and EskiLabs went out of their way to assist until all my queries were resolved.

Hello – I just wanted to say your theme is fantastic! I’ve never seen anything as flexible as this before. Just about everything is customisable from within WordPress appearance customiser.
— BrianTerry

This is a beautiful theme with equally beautiful functionality and support. Very well done.
— SimStudios

Scroll down past the following images for Metrolium’s feature list.

Create your own with unlimited combinations!

4.41 stars
4.41 average based on 134 ratings. (more information)
© All Rights Reserved EskiLabs
Contact the Envato Market Help Team
Quick Links Explore popular categories
by
by
by
by
by
by