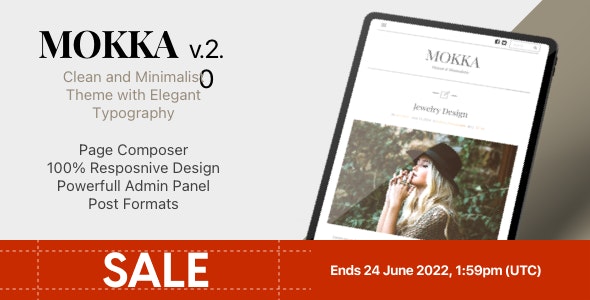 Mokka is a responsive, minimalist, flexible and modern WordPress Blog. From a clean white color scheme (with a accent color of choice) & multiple page layouts which all remain sophisticated and simple. Everything definitely brings a certain elegance.

Force Regenerate Thumbnails ? Usefull if your site already have a lot of content and images. Allows you to delete all old images size and regenerate the thumbnails for your image attachments.

Contact Form 7 ? Contact Form 7 can manage multiple contact forms, plus you can customize the form and the mail contents flexibly with simple markup. The form supports Ajax-powered submitting, CAPTCHA, Akismet spam filtering and so on.