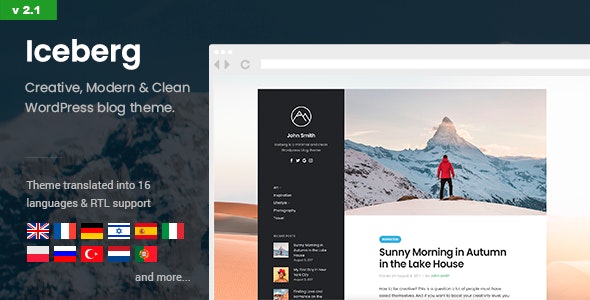 The Iceberg is a clean, simple, minimal, modern & stylish WordPress blog theme. This theme is the perfect choice for travel, food, business, photography, creative, news, lifestyle and any other kind of amazing blogs. The Iceberg is fully responsive theme, SEO-friendly and easy to use. This theme is minimalist design-oriented that helps you to showcase your posts super clean and beautiful. Good and thoughtful typography will make your content accessible and easy to read. The Iceberg has a Customizer that allows you to customize the colors, background, elements and logo of your website. Theme translated into 16 languages: english, french, german, russian, arabic, hebrew, italian, portuguese, spanish, dutch, polish, turkish, japanese, swedish, hungarian.